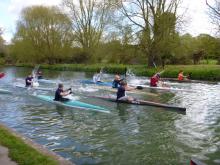 The Varsity marathon races took place over a four-mile course running between the town centre and Grantchester, with the results decided by the aggregated scores of the first three finishers from each university in each race. The men’s race ran first and was well contested with five paddlers from each of Cambridge and Oxford. Victory was taken by Sam Plummer for Cambridge, showing his considerable experience, though the team was unable to follow his example with three capsizes (and a marauding swan) killing off their chances of victory. 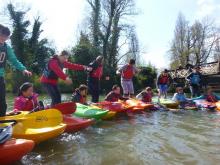 We had a really successful come and try it event on Saturday. Over 50 people tried out kaayking with us and we hope many will go onto join us. We'll be running a beginners course over the next 6 weeks to teach the basics of paddling. 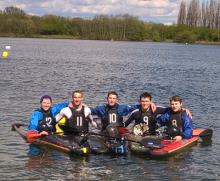 The Cambridge canoe polo team competed in BUCS over the weekend over the weekend of 16th-17th April, finishing a very respectable 15th out of the 31 teams in the Open division. The team won three and lost three games, but demonstrated considerable growth through the tournament, exemplified by beating a Liverpool team in the final round of matches who had in turn beat us in the opener.

On the weekend of the 16th April, five of us from CUCC headed to North Wales to complete a White Water Safety and Rescue Course on the Dee. The course included the development of both personal safety and survival skills as well as how to get others out of trouble and prevent problems in the first place.

Mention the National Student Rodeo to any paddler who has experienced one and you will quickly get an idea of what a crazy event it is. The combination of kayaking, a white-water course, hundreds of students, two nights of partying and a new theme (this year’s being ‘Christmas’) seems to be unbeatable in making for an awesome weekend.