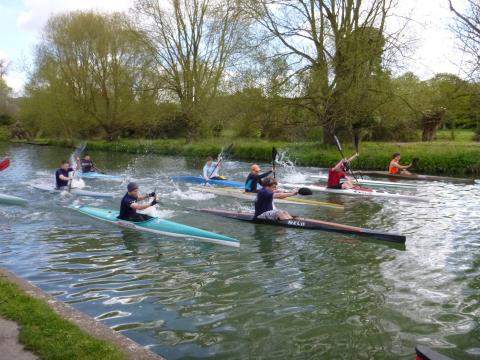 The Varsity marathon races took place over a four-mile course running between the town centre and Grantchester, with the results decided by the aggregated scores of the first three finishers from each university in each race. The men’s race ran first and was well contested with five paddlers from each of Cambridge and Oxford. Victory was taken by Sam Plummer for Cambridge, showing his considerable experience, though the team was unable to follow his example with three capsizes (and a marauding swan) killing off their chances of victory. The women’s race was run more smoothly but was particularly exciting for the spectators at the finish point, with a sprint for the line won by Oxford, who also took overall victory.

With two losses in the marathon racing, the pressure was firmly on the Cambridge team to perform in the afternoon’s canoe polo matches. A sunny, though windy, afternoon on Grantchester Meadows provided the setting, and vocal supporters on either side meant that there was strong support for a fast-paced, physical confrontation between the two sides, with Cambridge further motivated by seeking to avenge their earlier defeat in BUCS.

The ladies team played first in an intense game that came down to a thrilling golden goal which unfortunately went Oxford’s way, with an end score of 5-4. This was particularly impressive despite defeat as Cambridge were playing with an inexperienced side, who were one down for the whole game. The men’s game followed, which was another close fought game, although with a lot more binning. The result was a deserved 6-2 win for Cambridge, with the highlights being a hat-trick for Nathan Hammond and Alex’s self-binning skills. The last event of the day was a scratch game which was run much more informally, allowing Cambridge’s coach/referee Ted Roberts to finally play a game of polo.

Thanks go to everyone who competed, as well as polo captain Chris Hedges and coach Ted Roberts for masterminding the Cambridge victory of the day. Next year we expect a much stronger set of sides, both in polo and marathon, and to give Oxford a good hiding.