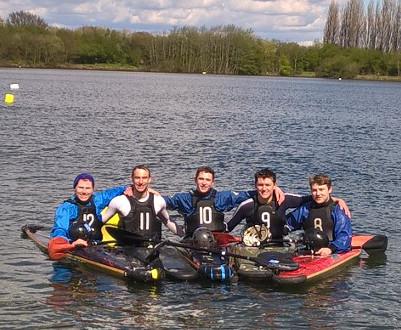 The Cambridge canoe polo team competed in BUCS over the weekend over the weekend of 16th-17th April, finishing a very respectable 15th out of the 31 teams in the Open division. The team won three and lost three games, but demonstrated considerable growth through the tournament, exemplified by beating a Liverpool team in the final round of matches who had in turn beat us in the opener. Particular highlights included a tight 3-2 victory against Bristol and a high-tempo, golden goal win against Surrey (5-4). Room for improvement, however, was clearly seen when succumbing to a determined Oxford side - something that should be quickly remedied in the upcoming Varsity match. However, given that the team was understrength, with no subs available, the overall picture was one of a team growing - and with all players set to be available for BUCS next year, Cambridge is set to go even higher. The team consisted of Nathan Hammond, Hector Newman, Chris Hedges, Lucie Studena and Jon Wall. Particular credit to Chris for organising the side, and Nathan for exceptional performance - we believe he finished as one of the leading scorers in the tournament with 12 goals across 6 games.