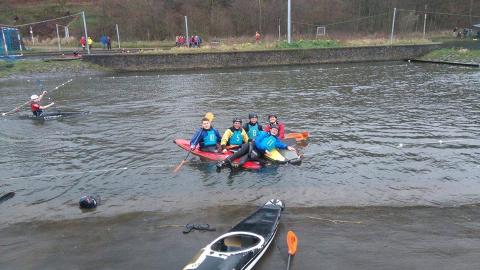 Half the team got up bright and early on the Saturday morning. The other half decided to sleep in and were the last ones to leave the campsite… Once the whole team was assembled at Taf Bargoed lakes, we watched a couple of matches and then got on the water early to warm up ready for our first match. It got off to a shaky start. Helen managed to bin herself before we even got to the pitch. After finally rescuing her, the team were eager to get started and excited to play some polo! Our first match was against the eventual winners of B league – Surrey. Our game was plagued with lack of communication. Our poor defence was only redeemed by Anthony’s awesome goalkeeping which kept the score down to only a 6-0 loss. But overall, Helen and Tamsin were happy to have played their first match – which was even better because they didn’t get binned! After some contemplation and great coaching from Jon on the ‘feedback rocks’, our next game against Warwick C was a complete turn-around. We were much more organised in attack and after some great feeding from Matt, Tamsin scored a hat-trick in the first half. Some lapses in defence meant we went into half-time leading 3-2. Anthony started the 2nd half by trying to steal the limelight from Tamsin with an awesome long-distance goal. Some great defence, particularly some aggressive barges from Helen, gave us a lot of possession and goals each from Matt and Tamsin. Final score was 6-3. Shoutout to Jon for almost killing one of the opposition – a swift bin was followed by cries from her teammates of ‘She can’t roll!!!’. Our final match of the day against Cardiff B was hotly contested. Everyone in the team played their best polo of the day, against a tough and probably more skilled team. The ‘Unbinnable’ Matt Linley played up to his self-proclaimed nickname and had some intense tussles with the opposition. Cardiff would score a goal and then we would equalise. With the clock counting down and the score at 4-3 to Cardiff, Anthony came charging in with the ball for another long-distance shot. It went soaring past the opposition’s paddles and straight into the back of the net. It truly was an amazing shot. The only problem was Tamsin had barged into their goalkeeper a second before and the goal was disallowed. The game finished 4-3. We all came off the pitch smiling though, as we’d all played a great game and were looking forward to the Space-themed party later that night. Saturday night, Tamsin expertly crafted some costumes with some reluctant help from the rest of the team. We drank. We danced. We had fun. Helen stupidly let a drunk Tamsin play with fire, but surprisingly no one got burnt. Sunday morning, we all woke up looking jaundiced (from the green face paint, not the alcohol…). We arrived at the lakes ready for our 0930 match against MUCC Wasps. We had another good match against tough opposition. We lost by a couple of goals (sorry I can’t remember the score!). Credit goes to Jon and Helen for getting us a team green card for arguing with the referee. If there’s one thing we did well this tournament, it was getting green cards (apart from Matt, who just played well in general). We ended up coming 4th in our pool which meant we had a knockout game against Bangor B – who came 2nd in their pool. It was another close game with only a couple of goals in it. If we weren’t winning, at least we were binning. Helen managed an awesome bin – the guy didn’t have possession of the ball but it was still awesome to watch. Anthony again had a great game as keeper. Tamsin managed her first handroll during a match which aroused a rapturous applause from the spectators (well her parents at least). After a whole weekend of boasting, karma finally caught up with the ‘Unbinnable’ Matt Linley. He’ll need to come up with a new nickname… Overall, we had a great weekend. Thanks go to Matt for refereeing all weekend!!! Tamsin and Helen really improved and survived a couple of binnings without swimming! Matt, Anthony and Jon all played amazingly and made up for a lot of mistakes from the two beginners.It was great team bonding and we look forward to BUCS and Varsity next term. O***** we’re coming for you! GDBO! This report was brought to you by El Capitan for the weekend - Tamsin Banner